We are going to the northeast corner of Africa to Egypt today. Except for an ex-colleague, I don’t know many people who have visited Egypt. But it is probably one of the countries that will be on my bucket list. Egypt has one of the longest histories of any modern country, arising in the 10th millennium BC as one of the world’s first nation states. Egypt’s rich cultural heritage is an integral part of its national identity, having endured and often assimilated various foreign influences, including Greek, Persian, Roman and so on. Egyptian Pyramids reflect this legacy and remain a significant focus of archaeological study and popular interest all over the world.

Egyptian Cuisine is mostly based on foods that grow out of the ground, which is good news to vegetarians. Meat has been very expensive for most Egyptians throughout the history, so a great number of vegetarian dishes have been developed. It is interesting to know that the Archaeological excavations in Egypt revealed that workers on the Great Pyramids of Giza were paid in bread, beer and onions, a customary diet as peasants in the Egyptian country side.

There is a whole list of amazing vegetarian dishes in Egyptian cuisine and I picked Koshari — a mixture of rice, lentils and macaroni/ noodles for today. Some people consider it to be the national dish of Egypt. I wanted to make this dish from one of the cookbooks ‘Cooking Light way to cook vegetarian‘ long time back. It’s not until recently I got a chance to try it out.

It is a simple, but filling dish. It has rice, lentils and vermicelli/ macaroni cooked together and served with creamy caramelized onions and spicy-sweet tomato sauce. It is a little time consuming dish to make, but it is well worth the effort and tastes amazing with different layers of flavors. Both my kids absolutely loved it and I’m sure I’ll be making this dish very often now. 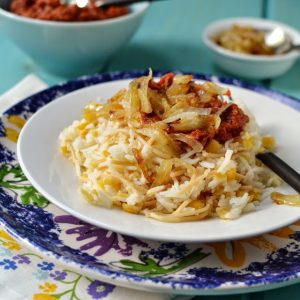 For the Tomato Sauce: 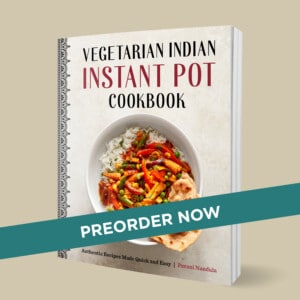