Goa is India's smallest state by area and is located on the the weat coast of India. Goa is India's richest state with a GDP per capita 2½ times that of the country as a whole. Goa is a former Portuguese province; the Portuguese overseas territory of Territory India existed for about 450 years until it was annexed by India in 1961. Goa has beautiful beaches and breathtaking views that attract large numbers of international as well as domestic tourists. My dad visited Goa a number of times for business purposes and he used to bring back bags full of cashews. Visiting Goa is something I would love to do sometime. Even though I cannot swim and will probably won't enjoy the beaches, but I want to explore the historic and artistic cathedrals and churches.

Cuisine: Goan food can be divided into Goan Catholic and Goan Hindu cuisine, each of which has its own distinct taste, charateristic and cooking style. Pork is widely used in dishes among the Goan Catholics. While the Hindu cuisine is partly pescetarianism and partly lacto vegetarian. Hindu cuisine mainly uses less heat, tamarind and kokum for souring and jaggery for sweetness. They use coconut oil as the medium of cooking.

Today's Dish: I have tried quite a few Goan dishes in the past. I love the use of spices in goan dishes and my absolute favorite is this Xacuti. For this edition I wanted try the famous Goan sweet dish called bebinca, but changed my mind at the last minute and made yet another famous spicy curry from Feijoada. Vaishali's blog has some very traditional Goan dishes and after browsing through her recipes I found this amazing curry that is brought over by the Portuguese. It is traditionally made by the Catholics using pork sausage, but Vaishali veganized it and added some vegan sausage to increase the protein in the dish. I followed suite and did the same. The dish turned out spicy, creamy, hearty and absolutely delicious. 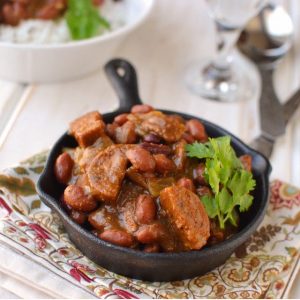 Lets check out what my fellow marathoners have cooked today for BM# 39.     An InLinkz Link-up
Tried this recipe?Mention @cooks_hideout or tag #cookshideout!