This Vegan Chocolate Cream Pie is a deconstructed and plant based version of the classic diner dessert.

This is a sponsored post. I received Cocoa powder & Chocolate from Divine Chocolate. Chocolate Cream pie recipe and all opinions in the post are entirely mine.

My second recipe for this week's #Choctoberfest is this creamy, dreamy and luscious vegan chocolate individual cream pie. This is a 100% vegan and plant friendly recipe but it tastes just as creamy as the traditional dairy based version.

Our generous sponsor Divine Chocolate sent cocoa powder, 55% and 70% baking chocolate bars. These baking bars are fair trade, non-GMO, and Vegan Society Certified. They have an exquisite melting point because they are made from 100% pure cocoa butter.

The lovely ingredients sent by Divine Chocolates inspired me to make this deconstructed cream pie. Vegan Chocolate pudding made with plant based milk (I used almond milk and coconut-almond creamer) was silky, creamy and deeply chocolaty. You can just stop at the pudding and devour it by the spoonfuls.

But make it extra special with the no-bake, buttery graham cracker crust and a smooth layer of whipped cream. You can make this dessert as a pie in a pie pan - but I like mini desserts. So I made these individual servings.

This is a great dessert to make ahead of time since it has to be served chilled. Perfect make ahead dessert for parties and both kids and adults will LOVE it. 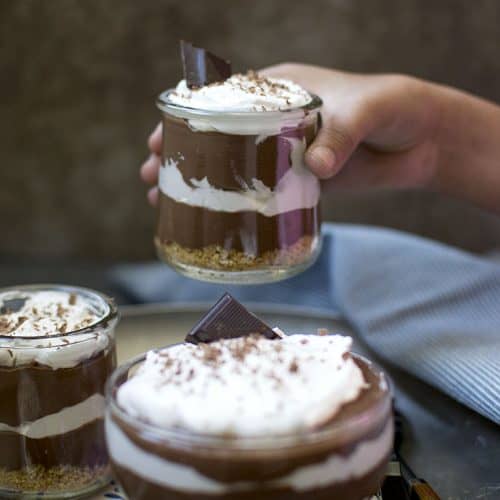