As I was looking for a dish to make for the final day of BM# 33, I narrowed down my search by looking for recipes made with X, Y & Z instead of the starting from A. Isn't that smart?? I think so too (patting on my shoulder right now 🙂

I got super excited when I saw Zeppole from Sandhya's blog in the list for Z and made it for our evening snack today. I've seen Zeppole in many street fairs but never tried to make it myself. This recipe sounded simple enough to try. I'm so glad I tried these because they were sooo good, we gobbled them all up in one sitting and wished there were more.. lot more.

Zeppole are also known as Italian donuts. Flour, butter and eggs are mixed into a dough and then deep fried. This particular recipe uses ricotta cheese and mascarpone cheese instead of butter. The resulting fried zeppole are so airy and fluffy that you lose count of how many you ate.

I didn't have any mascarpone cheese, so I used some vegan cream cheese I had in the fridge. I also used egg replacer instead of the 1 egg called for in the recipe. None of the substitutions affected the final taste or texture of these delicious zeppole. I added some orange zest to give them a slight zing. I served them with some chocolate sauce--yumm yumm.

Chocolate Sauce: Sauce can be made 2~3 days ahead of time and can be refrigerated until ready to use. Just warm it a little bit before serving. 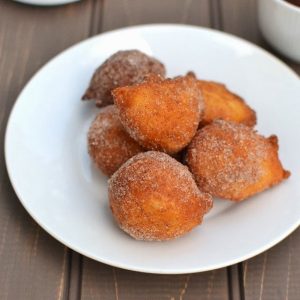 Lets check out what my fellow marathoners have cooked today for BM# 33.
Tried this recipe?Mention @cooks_hideout or tag #cookshideout!