Vegetarian version of Jordanian rice known as Mansaf. Layer of rice is topped with spiced vegetables, yogurt sauce and nuts. A hearty and delicious meal.

This recipe is from 'The New Middle Eastern Vegetarian' cookbook by Sally Butcher. I bookmarked almost all of the pilaf recipes from that cookbook. Some of the Middle Eastern Pilafs are quite elaborate with lots of flavors and textures.

In Jordan, Mansaf is eaten at every important occasion. It is made with meat, either camel or lamb. The name of the dish comes from the phrases 'large tray' or 'large dish'.

This vegetarian version of Mansaf has a layer of rice, topped with spicy vegetables and a creamy garlicky yogurt sauce. According to the author, the secret of Mansaf  is the inclusion of this yogurt sauce called jameed (or laban moutboukh).

Rice is cooked with butter and is flavored with ground cinnamon, salt and pepper. Ground turmeric adds a nice tinge of color to the dish.

To make this dish hearty, it is loaded with tons of delicious vegetables that are again flavored with garlic and Middle eastern spices. Here are the veggies in this layer:

To add some protein to the dish, soy granules or tofu or beans like chickpeas can be added.

Jameed is made with strained yogurt and is a sharp creamy sauce. It is served hot, so the yogurt needs to be stabilized. Traditionally egg white and cornstarch are added to the yogurt and cooked to avoid curdling.

But my own version uses some chickpea flour (besan) and cornstarch to ensure yogurt doesn't cuddle while cooking. Using whole milk yogurt is key, otherwise the sauce will split when heated.

Garnishing the final dish with nuts and fresh herbs or a green salad makes all the flavors pop in the mouth.

Mansaf is served over flatbread like pita or khobez. The idea is to break off pieces of bread with your hands, pick some rice and sauce and eat it all in one big bite. 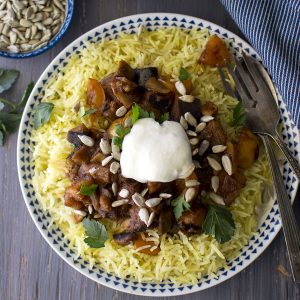 For the Rice Layer:

For the Vegetable Layer:

For the Rice Layer:

For the Vegetable Layer:

Linking this to Valli’s BM# 109 and don’t forget to check out what my fellow marathoners have cooked up today.