Our Blogging marathon group loves challenges and this time we have decided to do a month long mega marathon exploring the dishes from 30 Indian States & Union Territories. Which means starting today, all of us are going to post authentic dishes from each of the 30 Indian states in alphabetical order.

This would have been an impossible challenge some 5~6 years back, but with so many food bloggers from various parts of the country sharing their recipes online, finding authentic recipes was not too difficult except for the North eastern states. More about that when I do those states in a few days.

Preparations for the Mega marathon started almost 5~6 months ago, but I started working on them 2 months back. In the past couple of months, I have tried ingredients and ingredient combinations that I've never tried before. I can't say I learnt a lot about all the food cultures from the different states, but I sure know at least a few dishes names from each state now.

The most interesting take away for me after cooking from the 30 states is that 'there are so many similarities in the dishes that are made in different states, but at the same time there are as many differences in them too'. Take for example, rice is used in some form or the other in ALL the states, but the dishes that are made are very different from each other. Also the type of spices used and when they are added to a dish makes a big difference in the final taste of the dish.

Acknowledgements: First of my husband who was a very kind guinea pig. He ate everything, without a word, that was served even though some of the dishes tasted quite different with unusual ingredient combinations (from what we are used to). Thanks to the BM group for the inspiration (and nonstop chatter), without which I wouldn't have been able to complete the project on time. Thanks to the internet: Google & Wikipedia in particular for providing all the information on just about everything. Thanks for the hundreds of bloggers from across India for sharing their traditional dishes.

A for Andhra Pradesh: First day, we are exploring the cuisine of Andhra Pradesh. It is my home state and selecting a dish from it was quite challenging.

Andhra Pradesh is situated on the Southeastern coast of India. Ironically the state has been bifurcated into 2 separate states in the interim, but we decided to stick to Andhra Pradesh for marathon purposes.

Cuisine: Andhra Pradesh is the leading producer of rice, red chilies and millets in India. These influence the liberal use of spices making Andhra food one of the richest and spiciest in the country. Lentils, vegetables, tamarind are largely used in making the dishes. Various hot and spicy varieties of pickles form an important part of Andhra cuisine.

Regions: There are many regional variations in the cuisine based on the topographic location and the cuisine can be classified by region into Andhra, Telangana, Rayalaseema, Kosta (coastal) Andhra & Hyderabadi.

In the previous month long marathon, I did a A-Z of Andhra dishes and so it was a little difficult for me to find a dish that was traditionally made in AP. After discussing with my mom, who was here in the states at the time, I decided on this traditional sweet that is made in Thapeshwaram and it is called Thapeshwaram Kaaja. So starting the marathon on a very sweet note with this yummy dessert.

My aunt makes these really really well and my mom got the recipe from her. This was the first time for even my mom to make them and we were both very surprised on how well the kaajas turned out. They were flaky and very juicy even after a week of making them -- thanks to my pedamma for this traditional recipe. 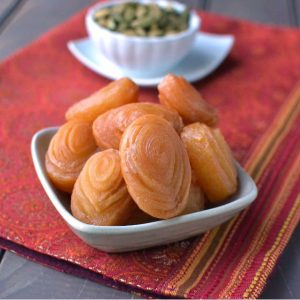 Store in an airtight container for about 7~10 days. Lets check out what my fellow marathoners have cooked today for BM# 39. An InLinkz Link-up
Tried this recipe?Mention @cooks_hideout or tag #cookshideout!