We are staying in Asia and visiting Korea today. I knew from day 1 that I would be doing Korea for K, since I live in a town that has a very high Korean population. We have a Korean grocery store in town and most of the stores have signs in Korean.

I hardly cook Korean food at home even though I have full access to all the Korean veggies, spices and other ingredients. I don’t have much knowledge of Korean cuisine and I thought this is a good opportunity to give some Korean dishes a try.

I was under the impression that all of the Korean dishes have meat in them. But there are a lot of Korean dishes that are actually vegan. Buddhist temple food is completely vegetarian and/ or vegan. I found an amazing Vegan Korean blog called Vegan 8 Korean and they have some awesome Korean dishes. I have tried a few Korean dishes already, check those out here.

I made Korean Miso Soup that uses Korean Miso paste called Doenjang. But a good substitute would be red or brown miso paste. I found quite a few recipes that used anchovies and fish sauce, but I skipped them and used some vegetarian options instead. Most of the ingredients were bought specially for this recipe.

I wasn’t really sure how this dish will be received by the family, so I made only a small quantity. I gave a spoonful to my daughter and she slurped it up. But my son turned his nose up when he tasted. So my daughter and I relished this for dinner. I also made Korean style Rice & veggie balls called Joomuk Bap (Fist Rice) to go along with the soup. 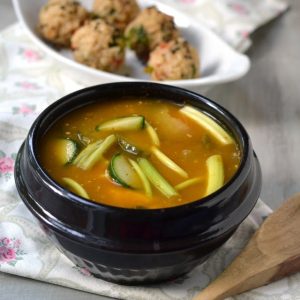