For this month's International Food Challenge and for this month, our host Shobana @ Kitchen Secrets and Snippets wanted us to explore the Alsace-Lorraine region. This is a multi-cuisine region which inherits partly German, partly French culture and so their recipes are influenced from both the countries. Alsace and Lorraine are separate regions in France's north-eastern corner, and share borders with Belgium, Luxembourg, Germany and Switzerland. Alsatian cuisine, somehow based on Germanic culinary traditions, is marked by the use of pork in various forms. Traditional dishes include baeckeoffe, flammekueche, choucroute, quiche lorraine and fleischnacka. Southern Alsace, also called the Sundgau, is characterized by carpe frite (that also exists in Yidish tradition).

Out of the many prominent dishes from the region, we were asked to pick 1 of the 3 dishes: Tarte Flambe/ Kugelhopf & Quiche Lorraine. I chose to make Savory Kugelhopf.

Kugelhopf or Gugelhupf is a yeasted soft -- a hybrid between cake and a bread. Usually kugelhopf is a sweet bread that contains raisins, almonds and is flavored with citrus. Some also contain candied fruits and nuts. A lesser known version of the Kugelhopf is its savoury Alsatian version called the Kugelhopf aux Lardons. “Lardons” is the French word for bacon, and this version is typically made with onions, ham/ bacon, walnuts and herbs.

Kugelhopf is a rich bread almost like brioche and has eggs in it. I used 'egg replacer' in place of eggs and the bread turned out great. This bread is baked in a Kugelhopf pan, but can also be baked in a bundt pan, a regular loaf pan or a muffin pan. 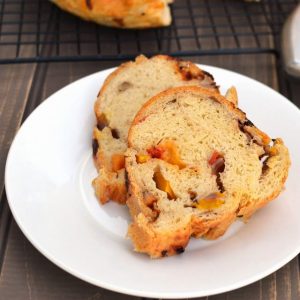 My bread stuck to the pan a little bit, so make sure to grease the pan very well. Let the bread cool in the pan for 10~15minutes before removing it from the bundt pan. Enjoy as is with some butter or with a warm bowl of soup.
Tried this recipe?Mention @cooks_hideout or tag #cookshideout!
« Yakhni Pulao (Hyderabadi Vegetable Yakhni Pulao)
Adzuki Bean & Brown Rice Burger Recipe »
1 shares