Letter V stands for my all time favorite vegetable Vankaya (brinjal/ eggplant), but I stopped myself from making yet another vankaya recipe (I already posted 4 recipes with eggplant in this month). So I made yet another favorite of mine, Vegetable Dum ka Biryani.

The first time I ever had veg dum biryani was some 8 years ago when my MIL made it when she visited us. It was quite a lengthy and time taking process — marinating the veggies, par boiling the rice, layering and then cooking on dum. I tried to make the process a little bit simpler and slightly faster than my MIL’s dish.

Instead of marinating the veggies, I cook them with spices so they don’t taste bland in the final dish. I either microwave basmati rice or pressure cook for only 1 whistle, so rice still holds its shape and does not turn mushy.

Biryani tastes great as is, but served with a side of gravy curry and tangy raita, it tastes absolutely amazingly delicious. We made tomato-onion raita and it went really well with the spicy biryani. 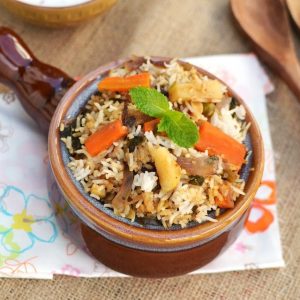