We are starting another edition of Blogging Marathon today and I signed up for all 4 weeks this month. We are at the tail end of our summer vacation in India and I can't believe how fast the time went. I had plans of meeting old friends and doing a lot of shopping, but nothing got done. With the 2 kids, it was impossible for me to get out of the house. Hoping that this final week will be a little fruitful.

My theme for this week is 'Tame the yeast'. This is a new theme that will be a standard theme for blogging marathon going forward. The idea is to have the more experienced bakers share their tried and tasted recipes with the group which will help the novice bread bakers to learn to tame and bake with yeast.

I made Mir'sWhole wheat Milk bread for the first day. I actually wanted to compare bread baking in US and in India, so I made this bread twice, once in US and then in India. The wheat flour and all purpose flour sold in India has low protein content when compared to the ones in US, so I wanted to see if there was going to be any major differences in the texture and taste of the bread. Here are my notes & observations:

I used a 8.5"x4.5" loaf pan in US, but used a 9x5" pan in India. The slight difference in pan volume along with the low protein flour content, made my bread rise much lower. My bread in US rose almost 1" above the rim of the pan, but in India it was about ½" below the rim, even after 1-1.5 hour second rise. I didn't want to wait too long, because sometimes longer 2nd rises might result in bread that sinks. 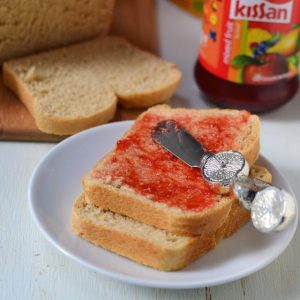 Here's a pictorial of bread making: Let's check out what my fellow marathoners have cooked up today for BM# 43.
Tried this recipe?Mention @cooks_hideout or tag #cookshideout!