This month's host of International Food Challenge, Saraswathi Tharagaram (Sara's Yummy Bites) is taking us on a culinary tour of Bavaria region in Germany. Germany is located in Western Europe. The topography of the country is varied, and includes regions of deep forest and high mountains, as well as a wide valley surrounding the Rhine, Germany's largest river. The highest mountain peak, the Zugspitze, lies on the border with Austria. Less than 3 percent of Germans are farmers, and the country must import much of its food. Apples, pears, cherries, and peaches, as well as grapes for wine production, are important crops in Germany.

The origins of Bavarian cuisine are rural. The cuisine typically includes many meat and Knödel dishes, and the prominent use of flour. The Bavarian dukes, especially the Wittelsbach family, developed Bavarian cuisine and refined it to be presentable to the royal court. This cuisine has belonged to wealthy households, especially in cities, since the 19th century. Some the traditional recipes I have listed below. Hope you all like it.

I chose to make Bavarian Dumplings from Saraswathi's list of yummy Bavarian dishes. These are actually bread or buns steam baked in milk mixture. These are like the Coconut Buns (Pani Popos), but use regular milk instead of coconut milk for baking.

I halved the recipe that she gave us and made it eggless by using egg replacer instead of egg. I used some wholewheat pastry flour, but on hind site I shouldn't have because that made the dumplings a little tougher and not so fluffy and soft. Also I baked these in a non-stick baking pan, if I had baked them in a cast iron skillet, I could have finished baking on the stove top to get the golden brown bottom. 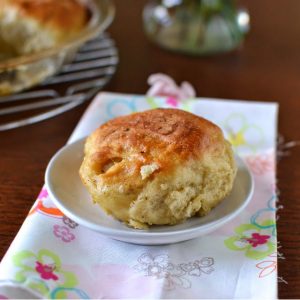 For the Poaching Liquid:

For the Vanilla Sauce: