Rainbow Dash Ice Cream is Creamy and delicious Chocolate Ice cream with Sprinkles made with just 4 ingredients and even a 5 year can make it.

So here we are the final post for this month's mega marathon, 'Explore the Flavors'. I have a sweet treat to celebrate the successful completion of the marathon. Ice cream is probably one of those treats that is sold as street food all over the world.

So today I have a creamy and delicious Rainbow Dash Ice cream, which is nothing but chocolate ice cream served with sprinkles.

My 5 year old found this Rainbow Dash Ice cream recipe in one of her 'My Little Pony' coloring books. She has been bugging me to make it ever since she saw it. She wrote the recipe and gave it to me twice and I misplaced it both times.

Finally she ripped that sheet off the book and started walking around with it. I knew I had to give in at that point. So we bought the ingredients and she made the ice cream herself, with some help, of course.

Ice Creams around the World

Italian ice cream is Gelato which is very traditional and popular street food in Italy. US is the largest consumer, about 23 liters of ice cream is consumed per person per year.

This recipe does not need any special equipment. It is a no-churn recipe that is easy to make, even my 5 year was able to make it. The trick to get it soft and creamy is to whip the cream until soft peaks form before freezing.

This Rainbow dash ice cream needs only 4 ingredients and here is what you need:

This simple recipe takes just 10 minutes to prep. As you can see in the video, my little one was able to make it with little assistance. 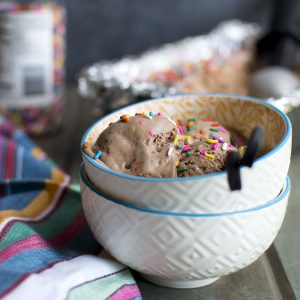 Here are some of my favorite homemade ice creams: