Thokkudu laddu is a very popular sweet treat from Andhra. They are also known as Bandar laddu because Machalipatnam or Bandar is where they were made originally.

This ladoo recipe needs just 2 simple ingredients, besan (chickpea flour/ gram flour) and sugar. Freshly made besan murukku/ janthikalu are ground and then added to the sugar syrup. I am sharing my Amma's fool proof recipe, so you can make the best tokkudu laddu right at home.

My mom makes the best traditional Andhra sweet and snacks. I have quite a few of my Amma's recipes on my blog.

Thokkudu laddu is one of my most favorite type of ladoo. This is a very traditional sweet from Andhra that is similar to besan ladoo. But this version is a little different and quite tasty.

These are also known as Bandaru laddu because they were made originally made and became popular in the town of Bandar/ Machalipatnam. Nowadays you can find them in almost every sweet shop in Andhra and Telangana.

Tokkudu ladoo recipe is quite simple and needs just 2 main ingredients, besan (chickpea flour) and sugar. First janthikalu/ murukku are made with besan. Once cooled, they are ground to a fine powder. Then mixed with single string sugar syrup and then pounded to make a smooth mixture. They are then formed into ladoo.

The most important part of this recipe is to get the consistency of sugar syrup correct. You will need to make a single string sugar syrup to get the perfect melt in the mouth texture for thokkudu ladoo.

This post includes detailed instructions on how to make the sugar syrup. There are also tips and tricks to fix any syrup mistakes. Follow the recipe to the T and you will be rewarded with amazing Bandaru laddu in no time.

Why are they called thokkudu laddu?

'Thokkudu' means pounding in Telugu. In this recipe, this pounding of the chickpea-sugar mixture removes any lumps in the mixture. It also helps in making super smooth, melt in the mouth texture to the ladoo.

For the details of the exact quantities of each ingredient and the list of ingredients needed, check the printable recipe card below.

Here are the ingredients you need to make thokkudu laddu recipe:

For the detailed instructions on how to make the recipe with exact timings, check the printable recipe card below.

Here is how to make tokkudu laddu recipe. It is a 2 step process, first make janthikalu, then make sugar syrup and mix them both to make the ladoo.

In a small bowl, combine besan and ⅓ cup of water. Mix to make a stiff dough. Add 1 teaspoon of water at a time to get the desired consistency.

Heat oil on medium-high heat in a heavy bottom pan. Using a spoon, fill the murukku mold with dough. Make sure to keep the rest of the dough covered to avoid drying out.

Once the oil is hot, press the mold over the hot oil and make concentric circles, so that the batter drops in the oil in circular coils. Fry till janthikalu turn golden brown all over. Gently flip it over and fry uniformly on both sides.

Remove with a slotted spoon on to a paper lined plate to remove any excess oil. Repeat with the remaining dough.

Let the janthikalu/ murukku cool completely. Break them up into into small pieces. Place them in a blender/ grinder and process them into a fine powder. If your blender is not powerful enough to make a fine powder, then sieve the powder 1~2 times to remove any big pieces of janthikalu.

Melt 1 tablespoon ghee in a small pan. Add halved cashews and cook until golden brown. Remove from heat and set aside.

Combine sugar and ¼ cup of water in medium size saucepan. Cook on medium heat, stirring occasionally. Sugar will melt and the mixture will start to simmer. Keep checking the consistency of the syrup. Once you get to a single string consistency, turn off the heat and remove the pan from heat.

Stir in the powdered janthikalu powder, 2 tablespoons ghee, cardamom powder and cashews. Mix well. The mixture will be loose and a little bit lumpy initially. But keep mixing until everything looks even.

Transfer some of the mixture into a mortar and pestle. Pound to remove any lumps and make a smooth mixture. The mixture will slowly thicken as it cools down.

Once it is smooth enough to your liking, take about 1~2 tablespoons of the mixture and form into a laddu. Place a roasted cashew half on top of a ladoo and let it cool completely on a lightly greased plate.

I love hearing from you!! If you’ve tried this and liked it, then don't forget to let me know. Give a star rating and let me know in the comments below. Also tag me in your creations on Instagram @cooks_hideout. I love sharing photos when people make my recipes. You can use the hashtag #cookshideout too. 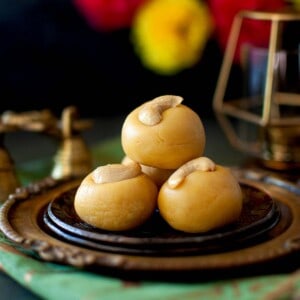